My group slowly left 40k behind for AoS, got a new AoS army and spent a lot of time playing with that. Going to start my Harlequins back up again as i miss them a lot. ALso will be playing Drukhari too.

With the new Ynnari rules coming out, i'll post about that later this week, i have some great ideas for Ynnari and Quins!
Posted by Josh Maddux at 10:19 PM No comments:

I dont know how many like tournaments, they do however seem to modify GW rules a bit and changes how many local clubs play (The meta, scenarios, some house rules like "Bottom floor is 100% LoS block, etc...) Rahter we like it or not, tournaments play a large part of the Warhammer community.

Tournaments however depending on where you go are slightly different and has different rules, this is b.c of scenario's and house rules are different from one place to another. Then you have counter meta lists that will make it to the top time to time.

But... from past tournaments i have been in (MTG, some Boardgames and other CCG games, even some other miniature games) there is something many of them do that for some reason warhammer 40k does not do.... Sideboards!

What is a Sideboard? Why are they used? How will it help 40k? How can we have them for 40k?


What is a Sideboard? Well a Sideboard is a limited selection of additional units, cards, models, pieces, that you are allowed to change in your Deck, army, etc.. before a round, or game against your opponent. Most cames only let you have up to 20-25% in a sideboard. SO if you have 60 cards, its 15 cards max, if you have 100PL points then its 20-25PL max on your sideboard.

Why are they used?
To have a more fair and even matchup. Thats it, it is to stop Rock, Paper, Scissors situations.
Example: In a heavy Tank meta where everyone brings Anti-tank options, then you have a match up against a person that is playing counter meta and brings 0 tanks and a hoard army, now you are being both counter offensively and defensively. SO you will swap out 2-3 units to make a more balance fair fight.

How can this help 40k?
Well a few ways, 1st is just enjoyment
One. In warhammer 40k, in tournaments, league, and even pick up games, the best and fun matches are for sure ones that are more balanced. For the losing player it helps them feel like they had a chance, and the winner player doesnt feel like the beat up a child.

Second. Not everyone plays house power lists and many will try to counter those power lists, out of 100's of games you could play you dont know your opponent, making a good TAC (Take all comers) list is great, but its not TAC for everything. The meta many times will be stuck, for an example, Eldar with mass Dark Reapers and Shiny Spears hiding in Wave Serpents (as it was for some time), if you could have a list that beat that, then its great, but if you never play those players then you are being counter the whole time. Having a sideboard gives you more TAC options.


How can we have them for 40k?
Well a few ways and they all are very easy even for tournaments

1) Make 1 1500 point list, and then 2 small sideboard lists at 500pts each, each round you pick 1 or the other to put into your main 1500pt list, it would also be limited to 1 detachment each sideboard.
1a) This way you basically have 2 sideboard detachments and your main force. This would be the easiest for everyone and the one i like best

There are other ways you can, these are just some ideas.

Over all a sideboard IMO will greatly help the meta of games and the need to be so harsh on units that are being abused. No one likes Rock, Paper, Scissor fights in 40k, when you dont really have a chance its never fun.

With the release of Drukhari (Dark Eldar) i'll be focusing on them for a bit until Harlequins gets their codex.

I've been really working on getting my models up to speed with WYSIWYG and will post very shortly.

My goal is that later today i'll post about something important in the Warhammer community to me, hoping to gain some traction. Then in the next week post a few pictures.
Posted by Josh Maddux at 12:04 PM No comments:

So, im heavily excited about the release of new Dark Eldar (Drukhari).

I'll be doing a post very soon about my DE army and its theme (Hint, its Mad).

I have a lot so talk about for DE, tho i am waiting for the codex to be in my hands first. 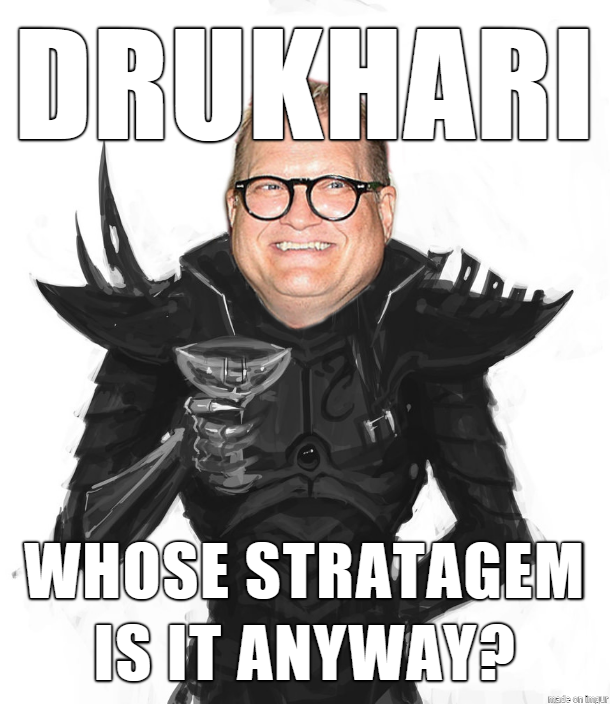 Posted by Josh Maddux at 2:39 AM No comments:

My grandfather died and i also have been starting to build my own business, so it has been very busy.

Fast update. Custodes came out, tho i like my Sisters of Battle a lot, i think i like the bikes better, me and my partner talked and we will do IG and Custodes.

I'll post a pictur ei the next day or two, i'll have a bike and or Captain finished soon.
Posted by Josh Maddux at 8:20 PM No comments:


Here is my Sisters of battle paint scheme, i need to hit it with a flat varnish to get some of the shine out.And i will need to figure out what base style i want. 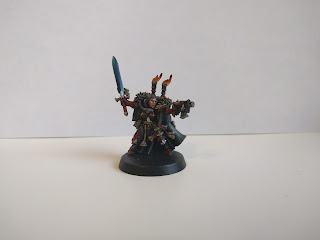 Posted by Josh Maddux at 8:09 AM No comments:


So my friend and i are doing Imperial. As i only have a Sisters of battle army i decided to play them lol. Tho i LOVE my harlequins, its more fun to play with friends!

Here is a fast update, i decided to go Red over Purple as i didnt care how to purple turned out. I highly enjoy painting red, so its more fun to paint also!.

I'll be back much sooner this next time around. I'll post some vehicles and Battle Sisters next. 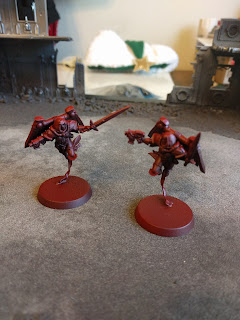 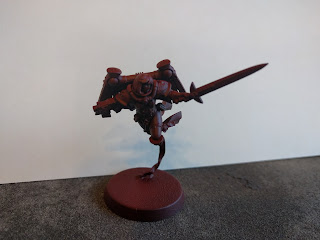